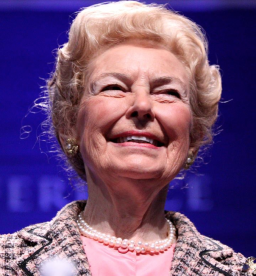 Phyllis Schlafly has been politically active since the 1940’s on conservative issues ranging from anti-communism, to segregation, to anti-feminism, to anti-gay rights, and at the age of 89, she can still be heard blathering on right-wing radio stations across the nation.

Phyllis is known as the godmother of the conservative movement. In 2011, to add to her mantle, she accepted a “Lifetime Achievement” award at a Citizens United event from the esteemed gay-bashing congresswoman Michele Bachmann.

Phyllis has helped to shape the conservative movement for generations to come, and of course, she will be most remembered for her anti-feminist group STOP ERA (STOP as an acronym for Stop Taking Our Privileges).

By the 1970’s, Phyllis had become a seasoned political activist, having fought many anti-communist and segregationist battles for the nation’s conservative movement. Armed with a typewriter, a megaphone, and wild accusations about the evils of feminism, she was able to single-handedly mobilize an army of distressed conservative housewives across America for a single mission – to steal the crown jewel of the second wave feminist movement – The ERA. She got her jewel. The Equal Rights Amendment fell three states short of constitutional ratification, and to this day women in America are still not guaranteed complete equal protection under the law.

Among her arsenal of weapons to stop the passage of the ERA was the use of anti-gay and lesbian rhetoric, which she skillfully used to distort the ERA as if “gay rights” and “homosexual marriages” would be the result of its passage.

Phyllis constantly railed against the ERA calling it Bella Abzug’s boondoggle and the “lesbian amendment to the constitution.” Her followers echoed the sentiment in less savory terms, decrying the ERA as “the lesbian rape of the constitution” and a “homosexual assault on American women.”

The video below is an excerpt from “Gay U.S.A.,” and shows Schlafly and cohorts using anti-gay sentiment to defeat the ERA.

The legislative battle for equal rights has barely begun!