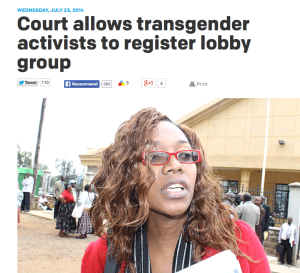 
The Daily Nation reports in Nairobi Kenya, that the high court in Kenya, in a landmark ruling , ordered the Non-Governmental Organizations (NGOs) coordination board in Kenya to register an advocacy group for transgender people

Transgender Education and Advocacy (TEA), members sued for discrimination and violation of their basic human rights when refused registration by the Kenyan NGO Board. The group is now legally allowed to register and function as an organization after High Court Justice George Odunga ruled in their favor.

Justice Odunga said the board’s refusal to register the group amounted to a failure in discharging statutory functions and mandate and “was unfair, unreasonable, unjustified and in breach of rules of natural justice.”

He also ordered the board to compensate the Plaintiffs Audrey Mbugua, Maureen Muia and Annet Jennifer, for the cost of the three-year litigation.

The judge said the Constitution upheld the individuals’ rights to assembly and cannot be deterred on grounds of gender orientation.

The NGO board had argued that it could not recognize the group’s members since the names they had submitted for registration were not the ones reflecting their gender. However, the judge said there was evidence that Ms Mbugua and her colleagues had indeed changed their names through a deed poll they annexed in the suit papers.

The judge said the premise of gender cannot be used to deny registration. “A public authority cannot be allowed to get away with discriminatory actions that deny persons their rights of assembly which is a clear abuse of the power bestowed on such an authority,” the judge added.

According to the Nation:

The group’s case seeking to have their transgender status recognised in Kenya has won a major legal battle.

This is after a high court judge ordered the Non-Governmental Organisations (NGOs) coordination board to register an advocacy group for transgender people in a landmark ruling likely to open a Pandora’s box of gender discrimination lawsuits.

Ms Audrey, formerly Andrew Ithibu Mbugua, has been battling for recognition as a transsexual.

She has a separate pending case in which she wants the Kenya National Examinations Council (Knec) to change the gender designation in her certificates on the grounds that the male identity has rendered her unemployable.