Distraught South African LGBTQI community is reporting another  murder of a lesbian, Thembelihle,  described by friends as a butch lesbian who lived at Sgodi Phola Section in Daveyton, a South African Township in the Ekurhuleni Metropolitan Municipality of Gauteng. Affectionately known as Lihle by her friends, she was last seen alive on Sunday early in the evening, before her body was discovered in the room of the alleged perpetrator on Tuesday.

“The perpetrator is someone that Lihle knew and trusted as a brother and a neighbor,” friends informed. The smell lead to the discovery of her decomposing body, under the bed.  She was renting a room not Selema Street not far from her family home.
The perpetrator handed himself over to the police.  He is a known rapist and an ex con who was recently release from Prison.  In the old days in South Africa, rapists used to hang for their crimes. Now it seems that many are on the street after time served and can even become a friend or neighbor.
We do not have a full report on this case yet as this news has just trickled in, however it is reported she may have been raped by the man in an incident of so called “corrective rape.” This is endemic to South Africa where straight men believe they can force a lesbian not to be same-sex attracted through the violent and hateful act of rape.

A local lesbian activists sent out this message: “Another Lesbian has been Killed again in Daveyton!!! Dis is really getting out of hands, they are our sisters and they deserve to be protected not murder.ed…… Wembulali kuyote kube nini kuphalala igati elingena cala. Lala Kahle Lihle, you will always be remember for living your life truly and being proud of being a Lesbian……”

Back in April and also in Daveyton, the body of the openly lesbian Patricia Mashigo (36), a mother of two children, was discovered out in the open in the Daveyton township. She was raped and appeared to have been stoned to death.

In 2011 a Task Team in partnership with the ANC led department of Justice and various stakeholders was formed to combat crimes against lesbians and yet it does not seem to have impacted the increase in the crimes we are noticing this year. There is still much ignorance and homophobia and it would seem at a glance some serious shortcomings in the Justice system itself, as it fails to protect the vulnerable groups from criminals let loose on the street, despite having been court and serving time for similar crimes.

Another Lesbian Brutally raped and murdered in South Africa 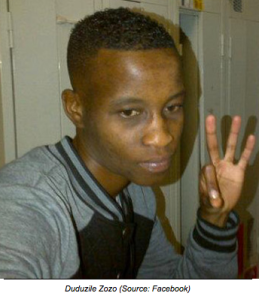 A lesbian woman has been brutally raped with a toilet brush and murdered in what is believed to have been a hate crime in Ekurhuleni over the weekend.

The half-naked body of 26-year-old Duduzile Zozo was found in Thokoza, Ekurhuleni, outside of Johannesburg, on Sunday morning, in what is another case of the brutal hate crime , “corrective rape” and murder.

Zozo’s grieving mother, Thuziwe Zozo, told the Daily Sun that she suspects that her daughter was murdered because of her sexuality.

“She was a lesbian but she has never had any problems before. People loved and appreciated her,” she said.  READ MORE