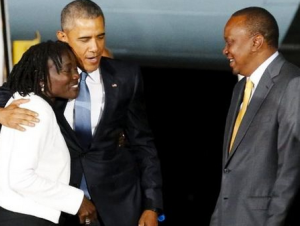 United States President Barack Obama has arrived in Kenya on the first visit to that country, since serving as US president. During his two-day visit the President will hold talks with Kenyan President Uhuru Kenyatta and other top officials.  Arriving in  Kenya, where his father was born, he was greeted at the airport by President Kenyatta with a handshake and embrace, and presented with a bouquet of flowers by a young child.  President Obama was also greeted by his half-sister Auma at the airport.

After leaving the airport the President traveled with Auma,  in the presidential limousine to the hotel where he is staying.

Security is tight. The Kenyan capital is on lockdown, many streets are closed and people are opting to stay at home.  President Obama is the first sitting president to visit Kenya, and will hold talks on trade and investment, and also security and counter-terrorism.

It is said that the President would deliver a “blunt message” to African leaders about LGBT rights and discrimination.

Homosexuality is mostly considered a taboo and repugnant to the cultural values and morality of Kenya, where the state punishes same-sex sexual acts as crimes.

LGBIs are discriminated, stigmatized and subjected to violence because of their sexual orientation. In cases where they need medical care, they suffer stigma perpetuated by health care providers who breach their privacy and confidentiality by exposing their sexual orientation to other colleagues at the facilities. The health care providers are not friendly and hardly understand their sexual and reproductive health needs. … LGBIs face physical harassment by members of public who mock and assault them for practicing “unnatural” sexual relations. In cases of assault by mob justice, the police often fail to come to their rescue. Upon arrest, police subject them to unnecessary body and house searches allegedly looking for evidence that could link them to other crimes. They are profiled as drug users, past prison convicts or individuals with track records of crimes. They often face arbitrary arrest, are often detained at the police stations, subjected to torture and unnecessary harassment by the police who extort money from them and are only released after bribing their way out. They also suffer sexual abuse from the arresting officers. … When their identities are discovered, LGBTIs cannot seek employment or undertake other forms of business – for example running a kiosk. Sometimes, they have to keep relocating to different residential areas to hide their identity. … Further they are often evicted from their rental houses by neighbours and condemned for their orientation which is termed evil. In cases where they are not evicted …, they are not allowed to use common utilities in the residential compounds such as swimming pools. LGBIs are also unable to access spiritual nourishment from the society because they are labelled as evil and the teachings in places of worship interpret LGBI activities as unnatural and unacceptable

There is currently an even stronger expression of anti-gay sentiment in Kenya, a reaction to the American gay rights gains, especially on marriage equality. The timing of the visit of President Obama, in such close proximity to his expressions of support for the SCOTUS ruling in favor of marriage equality for all 50 of the US States,  seems also to have triggered somewhat of a backlash against the LGBT people and their human rights in Kenya.

Communities in Kenya have warned that the President should not invoke the question of marriage rights for gays.  Social media has been abuzz with the resulting anti-gay rhetoric.  Kenyan politicians, such as Deputy President William Ruto, have recently taken a robust stand against LGBT rights, saying that there is “no room” for homosexuality in the country’s society. 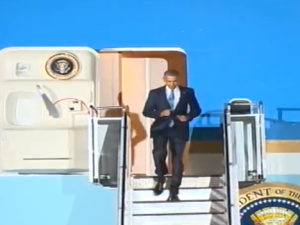 The trip to Kenya and then Ethiopia is also designed to show US commitment to fighting terror in East Africa.

He also becomes the first US leader to address the African Union when he travels on to Ethiopia on Sunday.

Kenya means a lot to President Obama – here they call it his homecoming – and he has both his heritage and his legacy to consider late in his final term.

His first engagement is a global entrepreneurial summit: better business and trade, not aid, are how he sees many Africans lifting themselves out of poverty.

But security remains America’s top priority while al-Shabaab can still kill students in their dormitories. And just two years after the Westgate shopping centre attack, security co-operation will dominate discussions. 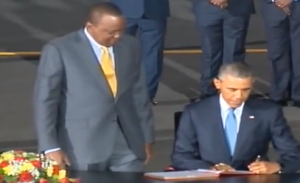 The interaction could be awkward, and with rights firmly on the American agenda there may be more to this trip than just smiles and photo opportunities.

Mr Obama expanded on his hopes for the Africa trip in a wide-ranging interview with the BBC’s North America editor Jon Sopel before he left Washington. President Obama also said:

Read the full transcript of his interview

This morning, four young Ugandan urban refugees were eating breakfast in the privacy of their rental premises in Kenya, when a mob entered the gate and started banging on their door and window screaming anti-gay slurs. After calling for help, the young refugees were then detained by police. READ MORE

The Kenyan Court’s groundbreaking decision which ruled in favor of the registering the National Gay and Lesbian Human Rights Commission (NGLHRC) as an NGO under the Non-Governmental Organizations Coordination Board Act,  is now being appealed by the Kenyan Government. The Attorney General for kenya and interested parties filed a Notice of Appeal in the High Court of Kenya this month and the appeal has now been served on Petitioner. READ MORE