You are here: Home » Protest as Lesbian Hate and Transphobia Haunts South Africa

PROTEST: Tomorrow, Jan 12, 2016 LGBTI activists are holding a rally and will march to the Mafatsana Police Station 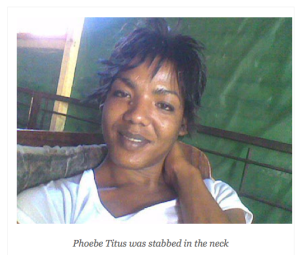 Two recent horrific murder cases elucidate the horror that lesbians and trans people encounter when faced with what is still considered endemic homophobia, lesbian hate and transphobia, in South Africa, a country with a constitution that ensures equality for all.

1.  A Western Cape transgender woman was knifed to death by a 15-year-old youth in broad daylight; the second reported LGBTI murder in the last month, as reported by Mambaonline:

On 27 December, at around midday, 30-year-old Phoebe Titus went with a neighbour’s child to an informal shop in the town of Wolseley to buy ice lollies.

According to reports received by LGBTI rights group Triangle Project, Titus accidentally stepped on the toes of a 15-year-old boy at the store.

The furious youth responded by allegedly shouting homophobic and transphobic slurs, including “vuil moffie” (dirty faggot) at the woman.

It’s alleged that a man in his twenties near the shop handed a knife to the boy, who then allegedly plunged it into Titus’ neck.

Bleeding profusely, she staggered away, collapsing and dying about 500 metres down the road in a pool of blood.

“I think she’d just had enough of being called names,” an emotional Sharon Cox, Triangle’s Health and Support Services Manager, told Mambaonline. “She was beautiful and was loved in the community. She was a hairdresser in Wolseley at the time of her death, and was a friend to many. Everybody knew her.”  READ MORE.

2. The horrific murder of a young lesbian woman who had just passed senior high school year,  has left the LGBTI community in the Vaal Triangle reeling and extremely angry:

The body of Motshidisi Pascalina was discovered in an open field near her home on 18 December in Gauteng’s Evaton North.

According to a community member, the young woman, approximately 19 years of age, suffered brutal injuries and mutilations. Reports indicate that she was tied by her neck and her arms and that her eyes were removed and her breasts and vagina and set her alight.  This type of murderous brutality is indicative of hate against lesbians which often include so called “corrective” or “curative” rape, torture.  READ MORE.

PROTEST:
Tomorrow, Jan 12, 2016 LGBTI activists are holding a rally and will march to the Mafatsana Police Station to protest against crimes against LGBTI people and the inaction by the local authorities, noting that other similar crimes in the area have received little attention, with perpetrators still at large.  A memorandum will be handed to the station commander. The march starts at 9 am. The starting point will be the BP Garage in Evaton North.

UPDATED Wednesday 1/13/2016:
Mambaonline is reporting arrests in this case, following the protest which occurred today: 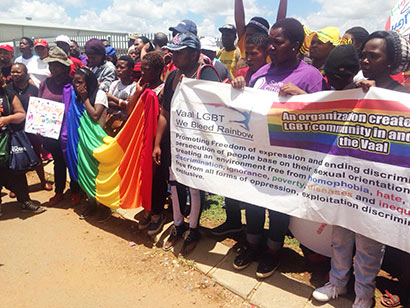 Mambaonline has been told that four suspects have been arrested for the murder and mutilation of lesbian matriculant Motshidisi Pascalina in Evaton North.

According to Mr Mokwena, chairperson of the ANC in the area, the suspects, whom he described as young men, are undergoing DNA testing.

On Tuesday, members of the community and activists marched to the Mafatsana Police Station in Evaton North demanding justice for Pascalina.

A memorandum was handed to the MMC for public safety and the station commander. 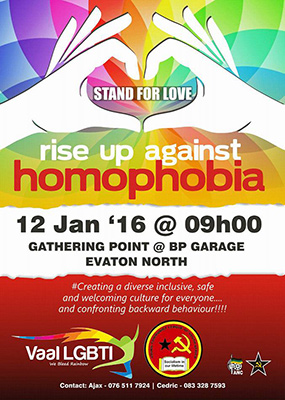 Copyright © 2012. Reprint by written permission only. All rights reserved. Melanie Nathan, O-BLOG-DEE-O-BLOG-DA, a subsidiary of Private Courts Inc. Copyright applies to entire site including but not limited to Articles,Blogs, Pages, and unless otherwise designated, Photographs. OBLOGDEEOBLOGDA(TM) Is Trademark of Private Courts Inc. and Melanie Nathan, 2008-2012.
Follow
Build a website with WordPress.com
%d bloggers like this: