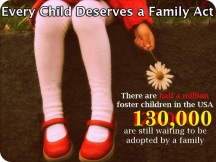 Like the Employment Non-Discrimination Act before it, ECDF is being re-introduced in both the House and the Senate complete with bipartisan support. This is the 3rd try for this bill having been introduced in the two preceding Congresses.  As you can see from the graphic to the right, I have updated last year’s promotional graphic to reflect the 5,000 additional foster children now left waiting.

Currently barriers exist in 39 states for LGBT families with some states having bans for either same-gender couples or individuals, and other states imposing near insurmountable restrictions.

PFLAG reports that there “are an estimated 400,000 children in the U.S. foster care system, 104,000 of whom are eligible for adoption. And as of 2013, there were more than 26,000 additional youth who “aged out” of the foster care system, putting them at high risk for poverty, homelessness, incarceration, and early parenthood.”

Families already exist for these children. However, the current patchwork of state laws does a disservice to them by denying them access to permanent, safe and loving homes. Many state laws prevent well-qualified individuals and couples the opportunity to become foster parents or adopt simply because of their marital status, sexual orientation or gender identity.

The Family Equality Council estimates passage of the Act would provide  access to “the safe and supportive homes of more than 2,000,000 additional LGBT people who would consider serving as foster or adoptive parents but currently face barriers due to existing state laws, regulations, and policies prohibiting them from doing so.”

In addition to opening up the legal possibilities for LGBT parents, improving recruitment of LGBT families to foster & adopt homeless queer youth is a really a requirement in all states.   The same with training for service providers & prospective families of all stripes to better understand the needs of these queer youth.  These shortcomings are issues 3 different task forces I am involved with are always talking about. Some of these would be improved as the ECDF will requires the Secretary of Health and Human Services (HHS) to provide support for service providers to ensure understanding of the legal, practice, and culture changes required by this legislation in making foster care and adoption placement decisions.

Last week, Rep. Paul Ryan (R-Wis.) made news by flip-flopping on his early vote against gay adoption.  This strikes me as odd coming from someone who doesn’t believe those same-gender couples willing to adopt should be allowed to marry in order to provide better protections for the family’s children; but perhaps I just don’t understand that sort of Republican twisted logic. Instead I will just hope to see his name among the co-sponsors.

Yesterday Newt Gingrich humorously claimed that Catholic foster and adoptive care services have been ‘outlawed’ from offering services in locales with gay adoption (and marriage equality) such as MA and D.C.  Seems to me this would be the end of Catholic Charities’ adoption business (and it is a business) in the U.S. because they choose to remain steadfast in their discrimination against LGBT families.  The last two attempts at passage of this bill were met with Right Wing demands of an outright killing of the bill.  Expect the same again.

We know that queer youth typically make up to 40% of the unaccompanied youth population in any given location.  We know that queer youth fear being shoved back into the closet so they shy away from seeking services whether they are emergency shelter, social services, or foster and adoptive options.  Who better than LGBT families to help fill the desperate need of homes for these youth?  The Every Child Deserves a Family Act may be all about the parents, but for me I see it as hope for the hundreds of thousands of homeless queer youth needing loving homes.  And another opportunity for the LGBT adult community to come forward to help.

The National Day of Action to lobby for the bill is May 30th.  Click the link below to see how you can add your voice!