You are here: Home » Homeless Youth | “Street Child: A Memoir” 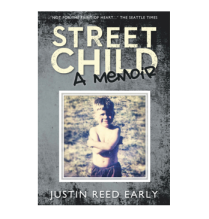 Los Angeles, CA, May 10, 2013….This week the acclaimed book “Street Child: A Memoir” was re-released with new chapters and photos by author and activist Just Reed Early. This is a revised and updated version of the book, which has enjoyed success and recognition over the past 4 years, as the issue of youth homelessness is getting more of the attention it deserves. The re-release of “Street Child” includes an epilogue about Early’s repaired relationship with his mother, as well as stories about the current lives of the people with whom he survived homelessness.

Early’s childhood was marred by abuse. He was bullied and assaulted by his own family. He was victimized by Juvenile Court Judge Gary Little who presided over his custody. Judge Little later killed himself upon being exposed as a pedophile and predator by a local newspaper. Early found comfort with his chosen family of homeless youth on the dangerous streets, and found his escape from his pain in street drugs. Most of his friends lost their battles to the more dangerous elements of street culture – but he made it out alive to tell his story – and theirs. Now a successful businessman, he knows not enough is being done to acknowledge and inspire the 1.6 million children each year who experience homelessness in America. More must be done to let them know they can have better, safer lives. Because of this, Early was driven to share his in-depth and personal view of his experiences within the juvenile justice and foster care systems. He strives to share his story with other homeless and at risk young people who find themselves trapped in the revolving door of systematic failure. He also gives his friends a new voice – as many of theirs have been silenced.

“LOU LOU” was murdered in a street fight while protecting her lesbian girlfriend. She was stabbed in the heart as 3 men taunted her with homophobic epithets. She was 21 years old.

“ROBERTA HAYES” (Justin’s street sister) was the mother of 5 children. Strangled by the Green River Serial killer, her body would lie in a shallow grave in the woods for 4 years. It took 2 more years to identify her remains.

Though many homeless children’s stories end tragically, “Street Child” is in fact a story of hope. Intertwined is a forbidden love, which brings much needed light to the surrounding darkness.

Here is what people have said about “Street Child”:

THE SEATTLE TIMES (Nicole Broduer) “Street Child is not for the faint of heart.”

STEVEN OKASAKI Academy Award winning Director “You want to turn and walk way, but something pulls you back – it is their tenderness.”

“Street Child” is an in depth and authentic, gritty look at a fascinating life with deadly consequences that discusses many of the elements and causes of homelessness while documenting inevitable outcomes. The writing is raw and real, giving the reader an unique view into a journey no child should endure.

Early continues to persevere on a journey that publishers were too wary to travel. He self published “Street Child” and has been promoting his book with his own resources and volunteers dubbed the Street Team gaining worldwide acclaim and reaching thousands of readers from as far away as Australia, United Kingdom and Czechoslovakia. His book has been defined as a must read which once started, most people couldn’t put down. He continues to inspire homeless and at risk children to write their own stories and to make better choices for themselves. He speaks candidly of his personal healing and the changes that bettered his life and the lives around him, addressing bigotry, racism, addiction. His efforts have proved effective as he continues his literary journey where many assumed he would fail. He receives emails and Facebook messages from fans all over the world. 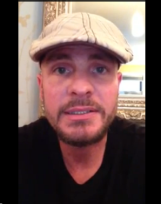 “I am using my personal story of life on the streets as a catalyst to help others,” says Early.  “This tragic turned magical journey has inspired and empowered children, parents and social workers. There is immeasurable loss and yes, people died. But I bring purpose to this pain and to these other children’s short-lived lives. Now, in death, they in turn are helping people too. I am making sure they didn’t die in vain. This is a book by a ‘statistic’ for other ‘statistics’. I wanted to put faces to the startling numbers we know are true. I feel I have succeeded in that. It’s not my successes that will most benefit others. It is my complete and utter failures.”

More about the author:

Justin Reed Early is an empowering public speaker with a dynamic and humorous personality. Also a businessman, Early was a founding Board member of the popular youth agencies, BAY Positives and Health Initiatives for Youth in San Francisco and served on the Board of Directors for the national agency, National Network for Youth. He remains a dedicated advocate for homeless youth as well as adults who suffer from homelessness and/or addiction. Early currently resides in Los Angeles. A portion of the proceeds from “Street Child” will benefit life enhancing non-profit organizations, including many of those that helped Justin while on the streets. He continues to donate books to homeless shelters, at-risk youth and social welfare workers in the United States. For more information go to www.streetchildmemoir.com

Homeless Queer Youth – Emancipation, is it really so “out of the box”?

Legal emancipation can give homeless queer youth the tools they need to become independent By Cathy Kristofferson, January 21, 2013. Thinking about a comment I had heard that maybe we need to ‘think out side the box’ for solutions to help with issues of queer youth homelessness I thought of emancipation.  It’s not a new […]

by Cathy Kristofferson on January 9, 2013

Can Massachusetts be a case study to improve the odds for homeless queer youth? By Cathy Kristofferson, January 09, 2013. The epidemic of homeless queer youth is an issue I’ve followed and advocated for because to me our youth are the most vulnerable among us.  They are empowered by our successes and are coming out younger and […]

by Cathy Kristofferson on January 1, 2013

Will 2013 be the year the gay community does something about it? By Cathy Kristofferson, January 01, 2013. Author’s note: The epidemic of homeless queer youth is an issue I’ve followed and advocated for because to me our youth are the most vulnerable among us.  They are empowered by our successes and are coming out […]

Singer/Songwriters and Spoken Word Artists come together to raise funds and awareness of our most vulnerable population By Melanie Nathan, January 17, 2013. Well I am definitely going to what promises to be an amazing evening – but more important the cause. I hope to meet some of our readers on Saturday, January 19th at […]

Re-introduction of the Every Child Deserves a Family Act