“… We must be able to ensure the safety and comfort of all our guests regardless of sexual orientation.”” 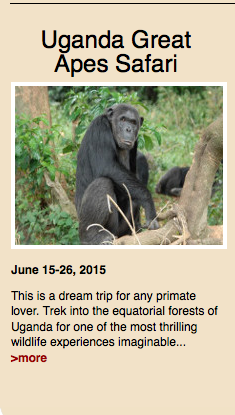 Many in the tourism industry consider the country of Uganda a jewel, often describing it as “the pearl of Africa.” Wildlife abounds and gorilla tracking is prime.  At Oblogdee we warned that notwithstanding the perfection of the safari destination, if the new Anti-Homosexuality Bill became Ugandan law, tour operators would likely start to withdraw business and discontinue to support the Country’s thriving tourist trade. Our prediction was well founded, as before the ink on President Yoweri Museveni’s odious Bill could dry, one world class and renowned tour operator cancelled its Uganda Great Apes safari and condemned the draconian law.

Immediately upon hearing about President Musveni’s assent to The Anti-Homosexuality Bill today, Jody Cole, renowned adventurer, philanthropist and human rights advocate, and founder of Wild Rainbow African Safaris, which specializes in guided safaris to East and Southern Africa, issued a statement to OBLOGDEE expressing disappointment in the Anti-Homosexuality Bill, while noting how the new legislation makes it almost impossible for tour operators to guarantee the safety of guests in Uganda:-

“We (Wild Rainbow African Safaris) are very troubled by the Ugandan Parliament’s passage of its notorious Anti-Homosexuality Bill. This bill is an affront on human rights as well as on the respect and dignity of LGBT Ugandans and their allies. As great lovers and supporters of the wildlife, culture and spirit of Africa, we are very disappointed and saddened by the passage and signing of this draconian law. While our trips are first and foremost about seeing and experiencing the amazing wildlife of Africa, we must reconsider whether we can go forward with future trips to Uganda in light of these latest developments. The safety and comfort of our guests is our number one priority, and we must be able to ensure the safety and comfort of all our guests regardless of sexual orientation.”

The Anti-Homosexuality Act imposes penalties as harsh as life imprisonment for people engaging in consensual same-sex sexual activity. It contravenes the rights guaranteed in Uganda’s Constitution and in regional and international human rights treatise to which Uganda is a party, including the right to privacy, freedom from discrimination and freedom of expression, assembly and association. The Act compels AIDS/ HIV testing when a person is accused of ‘aggravated homosexuality’ – an offense which criminalizes same-sex sexual activity among ‘serial offenders’, people with disabilities and people living with HIV, among others.

The Act criminalizes the ill defined, so called notion of ‘promotion of homosexuality’, which will mean that a group, such as Wild Rainbow African Safaris, marketing to the global LGBT community and using the term “rainbow” in its name, could face criminal prosecution when on Ugandan soil, for ‘promotion of homosexuality,’ not to mention the fact that guests who engage in same-sex relations could find themselves facing 14 years to life in prison.

We have no doubt that many more tour operators, will be compelled to follow the lead set by Wild Rainbow African Safaris.