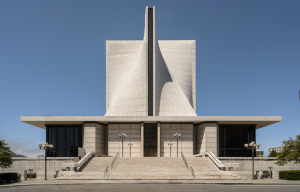 I recall protesting the installation of viciously anti-LGBTI Archbishop Salvatore Cordileone at the Archdiocese in San Francisco. Now it seems that it is not only gays that the Catholic Church in San Francisco has under attack and wants to keep from its opulent doorway. The venom has now spewed to the Homeless, in the form of dousing those seeking shelter with water, on these cold winter nights.

KCBS is reporting that Saint Mary’s Cathedral, the principal church of the Archdiocese of San Francisco, has installed a watering system to intentionally douse the Homeless with water to prevent them from sleeping in the cathedral’s doorways.

The cathedral, at Geary and Gough, is the home church of the Archbishop. There are four tall side doors, with sheltered alcoves, that attract homeless people at night.

“They actually have signs in there that say, ‘No Trespassing,’” said a homeless man named Robert.

But there are no signs warning the homeless about what happens in these doorways, at various times, all through the night. Water pours from a hole in the ceiling, about 30 feet above, drenching the alcove and anyone in it.

The shower ran for about 75 seconds, every 30 to 60 minutes while we were there, starting before sunset, simultaneously in all four doorways. KCBS witnessed it soak homeless people, and their belongings.

Let us note- this is not a garden sprinkler to water a lawn – its an outside shower – above the doorway – specifically designed to douse the Homeless and to waste what is left of our precious California water which we may be completely out of within the next year.

It is alleged that the sprinklers were illegally installed without a permit.

The Catholic Church has zero respect for San Francisco and California life as it is!

More news about the discriminatory behavior of the Church: SAN FRANCISCO, March 6, 2015 (LifeSiteNews.com) – San Francisco’s Board of Supervisors says the archbishop’s effort to ensure the city’s Catholic schools uphold their faith is discriminatory, and one member of the board says the city is considering legal action. At the same time, a reported 80 percent of teachers in the archdiocese’s four Catholic high schools have sent a petition to Archbishop Cordileone that accuses him of fostering “mistrust and fear.” Read.

that pours water on entrance areas of the church frequented by homeless after receiving a formal notice of violation from the city.

In a story first reported by KCBS, the principal church of the San Francisco Roman Catholic Archdiocese used the watering system to keep the homeless from sleeping in the cathedral doorways.

But the system also drenches some homeless people and violates city building and safety codes, as KCBS reporter Doug Sovern found out.

Do you not think that the Church should be made to publicly apologize and pay a fine.  In fact Mr. Pope how about selling that gold throne and crown and buying a few buildings to house the SF Homeless as compensation? And how about compensation for the lost water – like a few million dollars to the Water District?

Here is the so called apology?

The rector of Saint Mary’s Cathedral and the Auxiliary Bishop of the Archdiocese, Bishop William Justice,  issued a statement defending the role of the archdiocese and the cathedral in supporting homeless programs:

The idea was not to remove those persons, but to encourage them to relocate to other areas of the Cathedral, which are protected and safer. The purpose was to make the Cathedral grounds as well as the homeless people who happen to be on those grounds safer.

We are sorry that our intentions have been misunderstood and recognize that the method used was ill-conceived. It actually has had the opposite effect from what it was intended to do, and for this we are very sorry.

Justice said since the archdiocese has learned the system required a permit and may violate the city’s water-use laws, work to remove this system would be completed by the end of the day.

Perhaps the Bishop, who had admitted that this has been going on for 2 years, should have been more clued into the ACTUAL impact of the water dousing of homeless, rather than scrambling for excuses at this time. I find his story of relocation laughable!!! He  does admit that the Homeless was a problem and this system was installed specifically to get rid of the problems the Homeless were bringing to the property. And if I was his lawyer I would have recommended he avoid the contradictions in his statement and the further questions it raises. If anything I think this statement makes it worse for the Church. See video.