The Bishop of the Jinja Diocese of the Catholic Church, Bishop Rt. Rev. Fr. Charles Wamika, in today’s Easter Message  delivered at St. Chalres Lwanga Catholic Church, praised the Members of Parliament for the Anti-Homosexuality Act that provides life in prison for gay (LGBTI) people in Uganda. The Bishop called for a blessing for Uganda’s Christians who worked so hard to ‘free the land of gays.’  The Bishope also asked for parents to hand over their gay children to authorities, so they would be rewarded in heaven. I would call that a statement praising and calling for a genocide.

Since the passage of the Anti-Homosexuality Bill in Uganda, gay, lesbian, bisexual, transgender and intersex (LGBTI) people have gone into hiding. The law, which institutionalizes homophobia and affirms the persecution of LGBTI people, has been held in esteem, the highest reverence and praised by Christian leadership in Uganda, to the point of holding rallies to reward parliamentarians and the President, Yoweri Museveni. The Ugandan Churches and Christian community, (except for a handful, who have been banished and shamed for their compassionate and affirming stance,) have led the assault against gays. 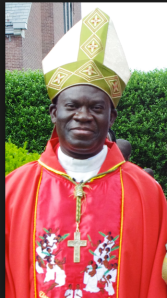 We have challenged noteworthy Christian leaders such as Joel Osteen and others to come forward and condemn the law, and to distinguish their brands of Christianity from that been touted on the stages and streets of Uganda, yet none have done so.

Now a young man in hiding, challenges the Pope, Pope Francis, as the Catholic Church’s official stand in Uganda, on this Easter Sunday seems to send a message of extreme hate, exacerbating the terror felt by gays in hiding.

As this law in Uganda seems to copy the course of Nazi Germany, the scapegoating, and the forcing of a minority into camps and death, the Ann Franks of Uganda remain in terror, questioning whether the Pope will repeat the mistakes of the Catholic Church during the Hitler Holocaust?

From the voice of a young man “accused” of being gay who is in hiding in Uganda:

“The Bishop of Jinja Diocese – Bishop Rt. Rev. Fr. Charles Wamika, in today’s Easter Message  delivered at St. Chalres Lwanga Catholic Church, praised the Members of Parliament for taking a stand to see to it that the Anti-homosexuality bill passed into law, he went ahead and called on the faithful to vote for President Museveni in 2016 general elections for signing the bill into law.

He reminded the Christians that, it has been a law and he sent blessings to all Christians who have been working so hard to make Jinja a land free of gay persons. He said throughout human history the catholic church has fought evil and blood has been shed, he called on all the Christians to do whatever they can in their own means to clean this city.

I am surprised that a well educated bishop, well traveled and studied in different western countries uses his position to justify killing. He asked parents with gay suspected children to handle them over to authorities and their reward is in heaven. This is too much hatred.    I wonder if we will hear from the Pope on this. If not, I lose all hope.”

To my way of thinking on this Easter Sunday the Ugandan Catholic Bishop of Jinja has indeed called for the extermination of gays.  I hope Pope Francis has a great Easter while Ugandan Gays have to hear this hate sputtering from his Bishops.   I think this Bishop should be recalled and put to pasture. Perhaps a petition is called for. And what about an apology and a clear message from Pope Francis on this tragic issue.

Well I am a lot quicker than hte Ugandan media which has provided some more ink to this well! Here are some quotes from other members of Uganda’s Clergy providing more gay bashing this Easter as follows:

In Tororo District, Bishop Emmanuel Obbo, the Archbishop of Tororo Archdiocese, urged every citizen who supported the anti-homosexuality law to lay down greed, corruption and “put them to death and let generosity rise up within us and flow out in abundance”. –  (http://www.monitor.co.ug/News/National/Embrace-national-ID-card-registration–Church-tells-Christians/-/688334/2286642/-/14w5uhkz/-/index.html)

Feel free, readers to interpret that one as you will!

“Wake Up Ministries Pastor Martin Nangoli asked leaders to deal with more pressing needs. “Our dear President did us proud by signing the anti-gays Bill into law. So each of us must repent, seek God, strive for forgiveness and renew our spiritual lives to create peace for development,” Pr Nangoli said.  Above all, we must know that any society that wants to grow with social values must protect the family. We must discard homosexuality to protect marriages,” he added.

I especially urge you to contact the Bishop if you are in a leadership Church role and also if you are Catholic. Please remember to be polite and not to stoop to their level of hate. That will only make it worse for gays as you will give all LGBTI a bad rap, allowing the haters to think they have cause to slot us as the devil! End the cycle BUT do State your beliefs and displeasure in strong terms.

Today, demonstrators, with a mural of eight posters, reminded the Ugandan Embassy in Washington D.C. that their country’s state sponsored homophobia has not been forgotten. As Martin Luther King said “Injustice anywhere is a threat to justice everywhere.” The injustice that is the Anti-Homosexuality Act and the persecution the LGBTI community of Uganda is facing because of it, will be an issue for the worldwide community until Uganda repeals their unjust draconian scapegoating law.  https://oblogdeeoblogda.me/2014/04/19/ugandan-embassy-in-d-c-targeted-for-homophobia/