Today 5 same-gender couples applied for marriage licenses in the registry office in the Admiralty Side, a district of St. Petersburg, Russia.  Officials at the registry explained that the licenses are only intended for couples of opposite gender and sent them on their way.  This is a bold move in a country and city where homophobia is on the upswing and the mere mention of homosexuality could get you arrested for promoting so called “non-traditional relations.”

In 2012, St. Petersburg was the first city in Russia to pass a law criminalizing “propagandizing to minors about homosexuality or pedophilia.” Similar so called “promotion” laws have since been adopted by ten regions in Russia.  As we reported here on OBLOGDEE earlier this month, the lower house of the Russian State Duma unanimously approved a bill to make the ban nationwide which the upper house and President Putin are likely to make law any day now.

Many countries and municipalities in former Soviet countries (FSU)  have either adopted similar prohibitive laws or are considering one.

On Sunday RUSA LGBTwill be marching in the New York City Gay Pride Parade together with us Americans and through the high-tech wizardry of virtualpride.org, the marchers in NYC will be depicted as if they are marching live in Moscow.  This simultaneous march through the streets of Moscow is designed to help raise awareness of the oppression suffered by the LGBT community throughout the FSU region.  See the OBLOGDEE post here about how you can participate from anywhere in the world!

IF YOU WANT to participate in VirtualPride with Moscow please click here http://www.virtualpride.org/

Pictures of today’s action can be seen here courtesy DP.RU and the Facebook walls of Yury Gavrikov & Nikolai Alekseev: 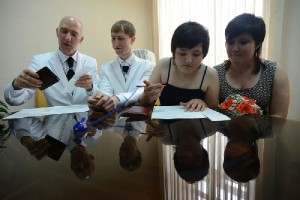 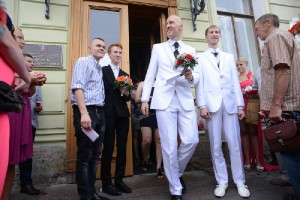 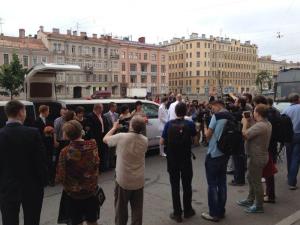 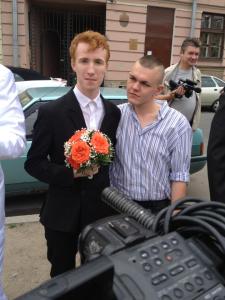