You are here: Home » Share a Coke with Gays

Coca Cola has a message for you – Let us share a Coke as long as it is not with Russian Gays, Ugandan Gays, Nigerian Gays, Gambian Gays, Zimbabwean Gays, Tanzanian Gays, Angolan Gays, and the list goes on…..

Coca Cola is a sponsor, amongst others, of the Sochi Olympic games, to be held in Russia next month. Russia President Valdimir Putin recently signed a law where so called and ill defined ‘promotion of homosexuality’ in front of a minor is against the law.

LGBT people in Russia and the other countries mentioned here are suffering vigilante witch hunts and persecution, at the hands of citizens and government alike, all given license by the likes of Putin and other less than noble dictators.

For as long as Coke continues to support the homophobic Putin Games at Sochi, they should bow their head in shame….. for them its about sales and not human lives…. and yet they have the audacity to use symbols, songs, and ads touting equality and love as can be seen in our earlier post on this topic after you have viewed the thirst quenching gallery of new share a coke designs, courtesy angry gays:-

And so all said and done:-

THIS IS THE TIME FOR

AND SO WE SHOULD ALL 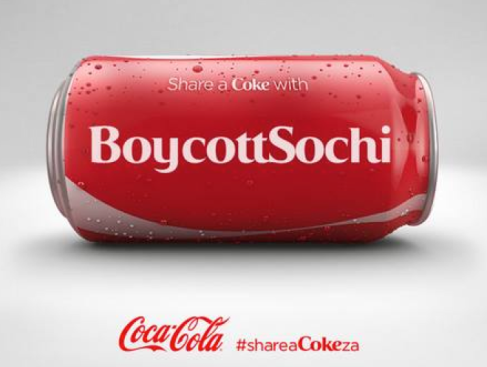 AND THAT DAMN AWFUL 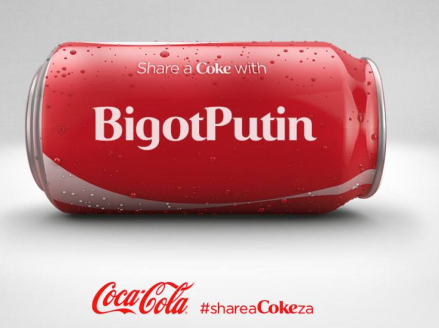 OF COCA- COLA DOES LITTLE TO

AND SO THEIR SPONSORSHIP IS NO MORE THAN

INSTEAD OF THE COURAGE TO

WHILE YOU ARE ABOUT IT 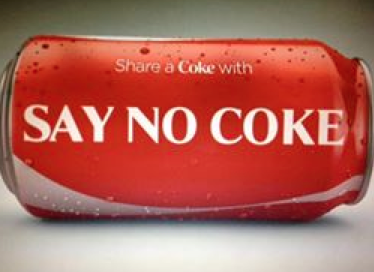