You are here: Home » Courageous Ugandan LGBT Community Holds First Press Conference Since the Passing of the Anti-Homosexuality Bill 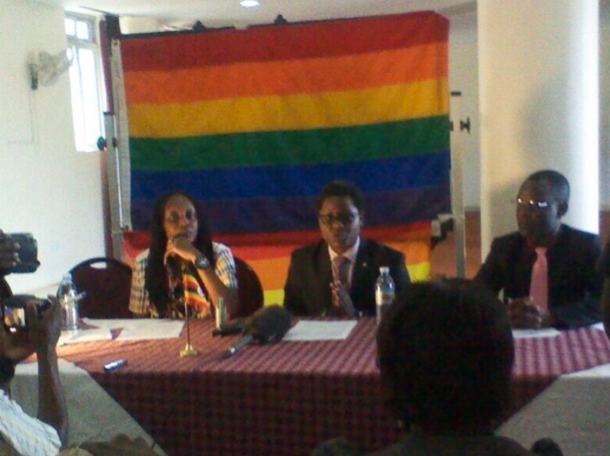 Amidst years of controversy, the Ugandan Parliament passed the Anti-Homosexuality Bill last week. Today the LGBTI community of Uganda raised its rainbow flag with pride, as it held its first post- AHB- passage press conference in Kampala. The hope is that the Ugandan media would listen to the statements read by the Ugandan human rights defenders and that the media would then get the LGBTI community message out to the nation, on this evenings news, and that they would indulge in fair and balanced reporting of the statements. As of 9:00 pm, this evening, Uganda time,  even though the press conference was well attended, it would seem that there are no Ugandan journalists yet reporting on the community statements.

The Private Member Bill is not yet law, as it must still go to President Museveni for his assent. The President does not have the right to veto the bill. However, if he refuses to assent to it, it then goes back to parliament, for another reading, where if passed by a two third majority, will automatically become law. The LGBT activists in Uganda have vowed to continue to protest the bill and have indicated that they will challenge the constitutionality of the Bill at the appropriate time.

The Bill was passed to this point, without a proper quorum and without being noted on the Parliamentary Order papers as part of the agenda.

Some members of Parliament, including the Prime Minister Amama Mbabazi, opposed the bill.

The Bill outlaws sexual interactions between same-sex partners, with a sentence of life imprisonment for anyone convicted of homosexuality.A proposal to put the punishment to 14 years in jail was rejected by the legislators. The Bill also makes it illegal to “promote” homosexuality, an ill-defined and very wide term, as well as implements a 3 year prison terms for anyone who fails to turn in and report a known homosexual to police.  The Bill far exceed the current and more vague Penal Code criminalization of homosexuality, with explicit terms and harsh sentences.

This Bill is plainly dangerous and will impact Ugandans, even non-gay Ugandans in untold ways.

European Union (EU) Vice President Catherine Ashton has asked authorities to respect the rights of sexual minorities in the country following the passing of the Anti-Homosexuality Bill. In a statement released on Friday from the European Union headquarters in Belgium, Ms Ashton described the piece of legislation as regrettable. She said, “the implementation of this law would contravene essential principles of non-discrimination enshrined in the international covenant on Civil and Political rights and in the African Charter on Human and People’ rights, both ratified by Uganda”. “I regret the adoption of the Anti-Homosexuality Bill,” Ms Ashton, also EU, representative for Foreign and Security Policy stated.

TO SEE THE PRESS STATEMENTS READ HERE ON OBLOGDEE

Seems the moral fibre is a little skewed when it comes to gays read more:-